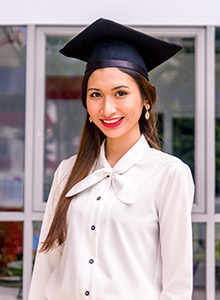 “ I was raised by a single mother since I was four. The affordable tuition fee and fee waiver offered by IUKL was part of the main reasons I enrolled here. I started my journey in IUKL studying Diploma in Corporate Communication before I continued with my degree. And now, I will be pursuing my masters in communication. I was actively involved in a lot of clubs and activities throughout my studies such as IUKL Badminton Championship Cup Tournament, Entrepreneurship Events, IUKL Music Club, IUKL Interfaculty Debate Championship and many more. I was the first runner-up at the Interfaculty Debate Championship and also the best speaker. During the Basic Entrepreneurship Event, my team and I was one of the teams to have won the bestselling products. ”