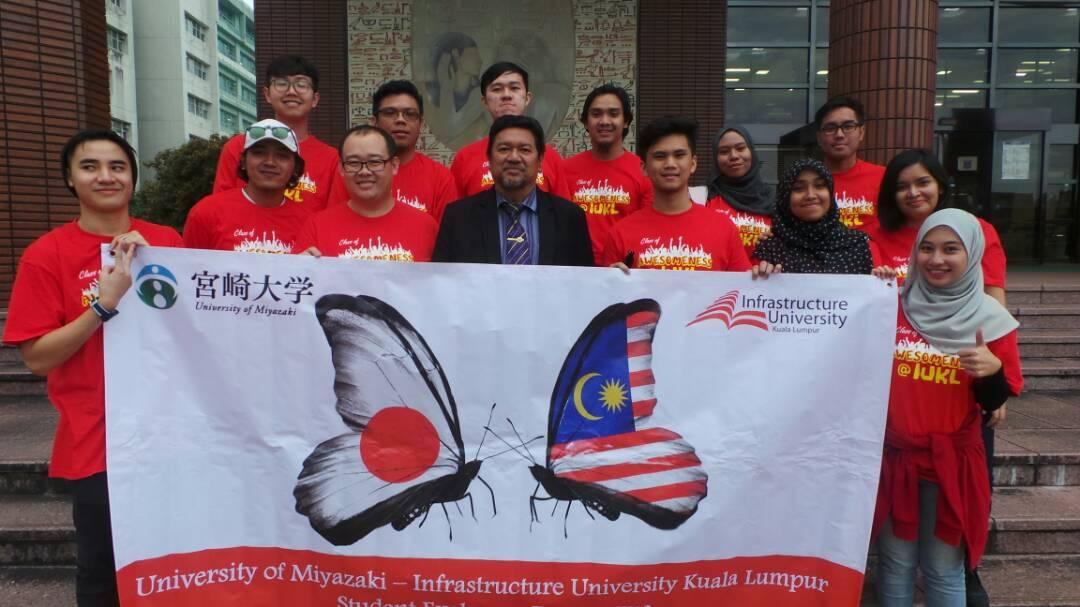 Kuala Lumpur: The expertise of Vice Chancellor and President of Infrastructure University Kuala Lumpur (IUKL) Prof. Dr. Roslan Zainal Abidin in the field of research especially on landslide has enabled him to be appointed as a Visiting Professor to the University of Miyazaki (UoM) Japan from 2016-2018.

As a visiting professor, Roslan has delivered a public lecture on the topic “Erosion Induced Landslide with Regards to Soil Erodibility and Rainfall Erosivity” to the students and professors of UoM on 26th October 2017.

“This lecture has opened up doors for future research collaboration between the professors in UoM and IUKL as quite a number of professors and students have showed interest in this topic.

“The role of an academician is not just about teaching in classrooms but should involve in research and share their findings of new knowledge to others.

“The most impactful experience I had was when I learned about the content of my lecture from my professor while I was a student in UoM and later brought back the knowledge to Malaysia and contribute to landslide issues in Malaysia,” he told MWM.

He added, he then brought back the knowledge to UoM and shared with the Japanese professors and students. He thanked UoM for moulding him to become who he is today.

Roslan was also a post doctoral fellow of the Korean Science & Engineering Foundation (KOSEF) 1995 at Seoul National University, Honorary Visiting Professor at University of Exeter, United Kingdom in the year 2000 and the Japanese Society for Promotion of Science (JSPS) Research Fellow at Kyoto University, Japan in 2006.

He was formerly the Senior Engineer at the Department of Irrigation and Drainage Malaysia for 15 years since 1981 before joining academic career at the MARA University of Technology in 1995 as a senior lecturer at the Faculty of Civil Engineering. He was promoted to associate professor and full professor in 1997 and 2001 respectively.

His major field of research are Soil Erodibility Evaluation & Rainfall Induced Landslide. Roslan was appointed as the Director of International Research Centre on Disaster Prevention (IRCDIP), UiTM for nine years from 2002 until 2010.

Meanwhile in IUKL, he is the Director of Institute of Geo Disaster Research Centre. He is IUKL’s Vice Chancellor and President since January 2013 and has published and presented more than 200 technical papers related to environmental disaster issues at various national and international conferences, seminar and workshops including as guest speaker and keynote address.

Roslan’s expertise in his field of research has made him a unique and outstanding person today. His research products are ROM and ROSE that can be used by the world in predicting landslide. His work is noble as it can save many lives and prevent disasters that could be avoidable.

Meanwhile IUKL and UoM also have collaboration in student exchange programme following a Memorandum of Understanding (MoU) signed between them on 24th March 2016.

The first batch of UoM students received by IUKL was in October 2016 and the second batch came in August 2017.

However in return, the first batch of IUKL students went to UoM for a one week exchange programme on 23rd until 30th October 2017.

Senior Lecturer from the Faculty of Arts, Communication and Education, IUKL, Harold Poong Wan Hing who was leading the programme recently said, its main objective is to provide a platform for IUKL students to experience Japanese culture in Japan and show casing Malaysian food, language and traditional games.

IUKL students also helped out in the “Lunch time English” sessions where Japanese students became their partners to speak and communicate in English.

“Our students also did the Malaysia-Brunei Cultural Exhibition where they shared some food such as fried maggie, banana cake, ‘sambal hitam’, ‘sambal kacang ikan bilis’, ‘serunding’ and ‘kerepek’.

“The students also shared some traditional games such as ‘batu seremban’ with some Japanese students and performed the 1Malaysia Truly Asia dance. They also had the opportunity to attend the Japanese tea ceremony, wear the Kimono and learn Japanese calligraphy. They ended the visit by visiting interesting places in Miyazaki such as Nichinan and Aoshima.

The programme is also to further deepened the collaboration between the two universities in terms of research and dual degree programmes and more in future.

“This programme benefits the students by providing them an opportunity to study with the Japanese students in a class, expose to Japanese culture and get to know more Japanese friends through the activities conducted in the programme.

“Enhancing students’ experience while they are studying in IUKL is also crucial,” said Harold.

He also mentioned that there are no specific criteria for the selection of students to join the programme as IUKL believes that this arrangement is to provide opportunity for students who want to get short overseas experience and is on a voluntary basis.

He said, based on his experience with different groups of student exchange programmes with IUKL, they became his “ambassadors” to promote future programmes to their friends. _Malaysia World News