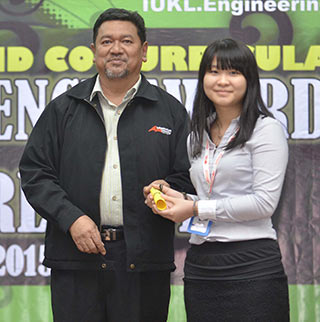 IUKL held its inaugural ‘Academic and Co-Curricular Excellence Award’ ceremony in December 2016 to honour over 150 students who excelled academically as well as in co-curricular activities.

The ceremony, which took place on 8 December 2016 at the Multipurpose Hall, featured remarks from IUKL President and Vice Chancellor. Prof. Dr. Roslan Zainal Abidin who said the student honourees represent future employees and leaders who will bring new ideas to their nation.

Prof. Dr. Roslan extended his congratulations and expressed his satisfaction before officiating the ceremony, “I am very happy with the success achieved by IUKL students through their academic performance and active participation in the co-curricular activities as well as winning competitions in local and international events.”

Next to follow was the presentation of awards which started off with the President and Dean’s List Award which was presented by the respective faculty deans. The recipients were selected based on those who achieved a CGPA of 3.70 and above in the June and September/October 2015 semesters. These students received a certificate to recognise their achievement.

Ensuing this was the non-academic awards which was presented by the Vice President (Academic and Quality Assurance), Assoc. Prof. Dr. Christiantine Della. 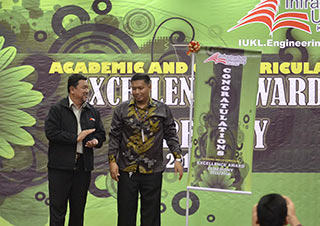 Several other awards were also presented to students who have carved a name for the university. Two teams from the Faculty of Architecture and Built Environment have brought home two awards which they won at the Royal Floria Putrajaya. One team won a bronze award for the University Garden Competition in 2015 while another team won a silver award for the Wall Art Competition in 2016.

From the Faculty of Arts, Communication and Education, the ‘Majestic Group’ won first place with their short video entitled, ‘Pusaka Warisan’ and another group, ‘The Fantastic Four’, won second place with their video, ‘Budaya Melambangkan Bahasa’.

The Faculty of Engineering and Technology Infrastructure (FETI) has been represented well by its students through three achievements.

Next, was the presentation of awards for achievements in sports which was presented by the Registrar, Tn. Hj. Md. Mokhtar Md. Piah.

The ‘Best IUKL Sports Team’ was awarded to IUKL’s Running Club for the number of competitions won and other recognitions achieved on campus and outside the campus. The ‘IUKL Sportsman’ title was awarded to Mohd Nor Adli Roslan for his contribution in floorball while Adele Han May Jen was crowned ‘IUKL Sportswoman’

in squash. The ‘Outstanding Achievement in Sports’ award was presented to Kavinessh Kathiresan for his involvement in woodball.

All non-academic achievement recipients received a plaque and a certificate.

At the end of the award presentations, Muhammad Hafiz Ahmad Fadzil was called on stage to receive a certificate of appreciation for his contribution and leadership shown as a member of the National Student Consultative Council (Majlis Perundingan Pelajar Kebangsaan).

The half-day event wrapped up with refreshments accompanied by singing performances by IUKL Garuda.