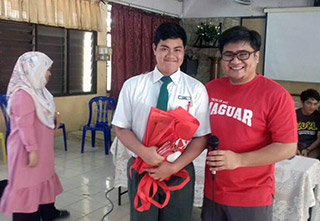 On 5th March, 2018, a group of lecturers from the Dept. of Language Studies, Faculty of Arts, Communication & Education (FACE), paid a visit to SMK Jalan Reko to introduce its English Language programmes and promote IUKL to the school’s fifth form students. Over 100 students gathered at the school hall to participate in the activities FACE had lined up for them. After a warm welcome from the teacher representatives from SMK Jalan Reko, the lecturers began their half-day programme with an interactive talk on IUKL and FACE. Questions on how much they know about IUKL and FACE were posed to the students who willingly shared what they knew and were eager to know more about FACE.

Following the introductory talk was a short motivational talk on the importance of communication skills in English today. Students were asked of their greatest fears in communicating using English and one student who claimed that she disliked communicating in English was asked to step forward to explain to the audience why she felt so. Through such interactive sessions, it was discovered that the fear of communicating in English was caused largely by their lack of vocabulary. The students claimed that they had plenty of good ideas but found it difficult to express those ideas because they could not find the right words. Reading extensively and additional tips were recommended to the students as a way to build their vocabulary. 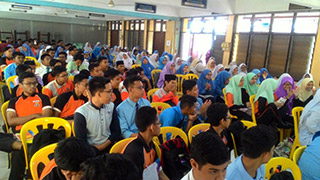 After the talk, the students were engaged in English language and communication games for the next 2 hours. Students sat in groups and appeared to enjoy themselves developing ideas in English as required by the various games that FACE had planned for them. Prizes were given to the winning teams and the students were overjoyed to receive them. The games brought out all sorts of fun and emotional antics of the students. One female student even broke down in tears because she was so overwhelmed by the fact that she had presented in English in front of a large group for the first time.

At the end of the visit, the teacher representative, in her speech, said that she wished for many more such visits from FACE, IUKL which would greatly benefit the students. The lecturers from the Dept. of Language Studies, FACE thanked the school for allowing them to share their expertise with the young, aspiring students. On the whole, the visit proved to be a WIN-WIN event for both FACE and SMK Jalan Reko!