Home » Archived Media News » Where music is as lovely as prayer

Where music is as lovely as prayer 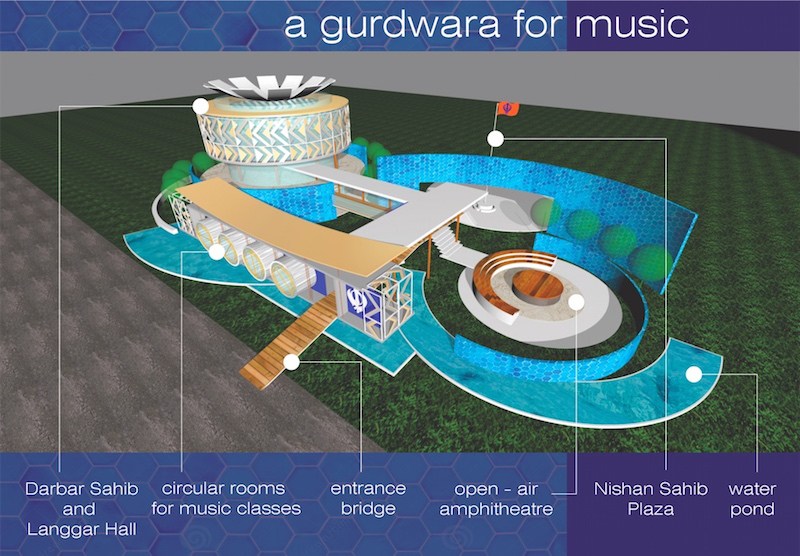 Music is a celebration of life.
It is undeniably evident to observe that cultures all across the world celebrate momentous events and occasions in their lives, either collectively or individually, through the expression of music. This wonderful collection of notes and tunes, symphonies and rhythms manifested in rich acoustic expressions have greatly contributed to enriching  the soul of men, and women alike. Each generation that has lived on this earth has presented their own unique flavour on their own kinds of musical styles and genres, much to the pleasure of the masses.

So what of the role of music in Sikhi?
Just as many of the great cultures in the world, Sikhi too has a vast and majestic wealth of  musical legacies that has its roots in classical Indian acoustics, tempered with the softness of Urdu and Persian poetry. Ghazals and Nazams abound in the culture of our people and nothing is sweeter to hear than that the Shabads of our Gurus sung in their loveliest forms, sounding romantic, tranquil and profound (all miraculously) at the same time.

In most Gurdwaras, if not all, musical classes are conducted to impart such divine knowledge to the young and old alike, such as through the singing of Kirtan and the playing of waja classes. To hear someone sing with all their love a precious Shabad from the Sri Guru Granth Sahib (SGGS) or to listen to the melodious cacophony of sounds generated by the waja can put any listener in a state of blissful trance, allowing them to feel waves of serenity slowly wash over their mind, body and soul, giving them purest sense of inner peace a human being could possibly feel.

Realising the power of music has over the human soul, and how it connects us to the divine on such a sublime level, than indeed it becomes our joyful responsibility as a people to continuously impart such skill, appreciation and knowledge to anyone who seeks an interest in this field. So we see devoted musicians who take on the role as teachers to impart such beautiful insights into music and its power to give us joy. In Gurdwaras, in particular, we have classes conducted in simple rooms adequate to teach the eager student. However, what if we could take this idea of teaching music in a Gurdwara one step further?

Let us imagine for a moment that we could design a Gurdwara specifically for the teaching of music, especially through Kirtan and Shabads, and design various facilities to conduct musical classes and accommodate such needs. Imagine a Gurdwara that could have music classes in the main complex of the Gurdwara in a studio-like room, and design classes that individually cater to music lessons that had a unique identity of its own. And finally, in addition to the primary spaces a Gurdwara must have which are the Darbar Sahib, The Langgar Hall and the Nishan Sahib Plaza, imagine another addition, and an open–air amphitheater to allow for kirtan to be sung under the night sky by a group of raagis added to the design of the Gurdwara to create that commitment to musical education and appreciation.

That, ladies and gentlemen, is the premise of the concept of the next contemporary Gurdwara in this article as a continuation of all the previous modern Gurdwara designs I’ve proposed before. As usual, please do take into consideration that this design is simply a play of the imagination, and therefore, should be viewed as a case for architectural experimentation only.

One of the main aspects of the studying of music that is of critical importance is the notion of “flow”. In the study of music, “flow” refers to how smoothly a series of musical notes connects to another, creating a soothing symphony that’s soft on the ears and even softer on the heart. The idea of “flow” is also popular in architecture referring to how spaces connect to each other through open non-restrictive divisions, glass partitions to allow for the flow of sunlight and curved walls that guide people with a gentle sense of direction. Based on the concept of “flow” and how important it is in both music and architecture, this Gurdwara is designed around walls and rooms that project a curved appearance, to allow for the notion of “flow” to take place. 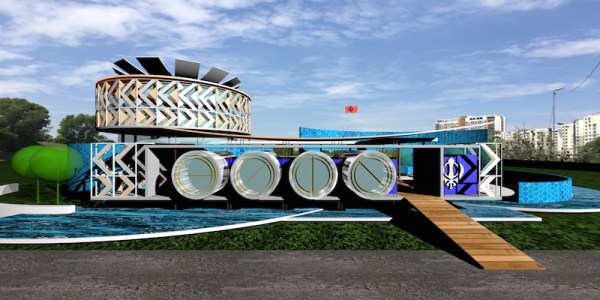 The front of the Gurdwara complex has an extended bridge to welcome people into its premises with a clear sense of direction. The bridge however also has 4 circular rooms located on the left side of the Gurdwara complex, where individual kirtan or waja classes can take place, such as in a studio. The design of the rooms is circle to project the idea of it being a unique centre for musical classes and that is the focus of the Gurdwara and even the window frames look as if they are rotating from one room to another, giving the impression of movement and the turning of rhythms from one piece to another.

The other interesting addition made to this Gurdwara is design of the open–air amphitheater, surrounded by beautiful curved walls decorated with blue hexagonal shaped mosaic tiles. The reason why blue plays such an important role in the look of this Gurdwara is to highlight its significance as the colour of the Khalsa, and also blue is psychologically proven to put people in a state of calm and peace, which serves as the perfect backdrop for the singing of divine music for the benefit of the Sanggat. 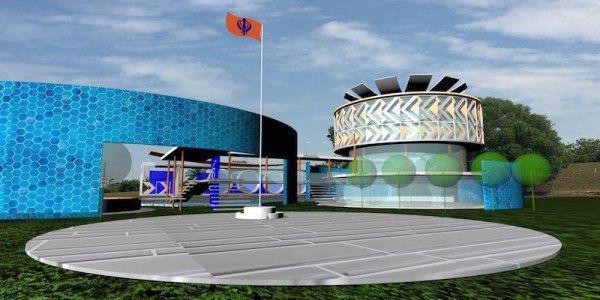 To continue with the idea of “flow” the Darbar Sahib itself is a circular hall adorned with a motive of arrows placed in a curving metal screen showcasing a suggested notion of direction, while have a lotus like dome on its roof. The Nishan Sahib plaza is a circular platform, too. At the back is the beautiful curved blue walls that act as a striking backdrop for the majestic sway of the Nishan Sahib. 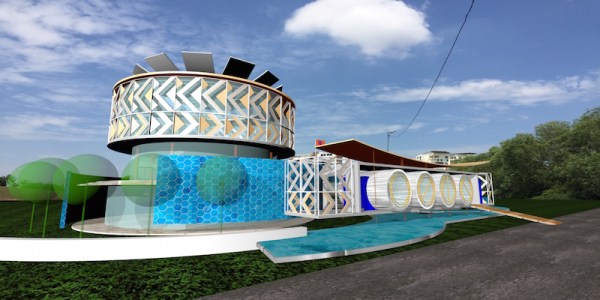 The curved glass walls of the Darbar Sahib can clearly be seen from this view. The curved metal screen, acting as a series of window frames, creates a rhythmic screen of gold and silver arrows that intrigue and captivate the eye. The curved blue walls here, too, create a delightful addition to the visual identity of the Gurdwara, thus creating a truly unique complex for the teaching, propagation and appreciation of music, particularly in the Sikh faith.

Music, being such a powerful component of the human experience, thoroughly deserves a special place in our hearts. Every time a note is played or a poem is recited, we are inexplicably moved by how the interplay of musical elements and deeply meaningful lyrics or hymns can bring countless episodes of joy into our lives. A Gurdwara truly is a befittingly wonderful place to allow for music to connect us to the divine to experience such serene episodes of heavenly calm. And it is for that love of music that this Gurdwara was proposed and architecturally expressed. God Bless.

The next article will focus on the possibility of a designing a Gurdwara with the inclusion of sustainable urban farming on its premises. This is to facilitate the supply of wholesome food to the Gurdwara, and also as a centre for the distribution of food to anyone who needs it.